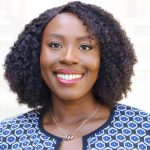 Lloydette Bai-Marrow is an anti-corruption expert and economic crime lawyer.

She is the Founding Partner of ParaMetric Global Consulting, a boutique white collar crime investigations consultancy. The practice focuses on helping clients with proactive projects such as risk reviews as well navigating through times of crises dealing with matters such as internal investigations, law enforcement/regulatory investigations or settlement negotiations.

A former Principal Investigative Lawyer within the U.K. Government’s Serious Fraud Office, where she provided leadership and legal advice on complex and high profile cases of fraud, bribery and corruption in the UK and abroad.

She has worked in U.K. government departments including the Crown Prosecution Service and Her Majesty’s Revenue and Customs (HMRC).

In 2020, Lloydette was appointed as Independent Investigation Counsel for a U.S. publicly traded company and conducted a year-long independent review into corruption allegations in South Asia. Lloydette is a member of the Board of Trustees for the Unite Foundation, the charitable arm of Unite Group, a U.K. public listed company.

She is a Visiting Lecturer at the International Anti-Corruption Academy in Vienna, Austria.

I work with individuals and corporates facing the exercise of criminal or civil investigative powers such as the execution of search warrants, arrest and interview as witnesses or suspects. I can assist with strategic planning at the start of a criminal or regulatory investigation and provide insight and guidance to the Senior Management Team and the Board. I provide advice on best practice in light of the evolving legal and regulatory environments.